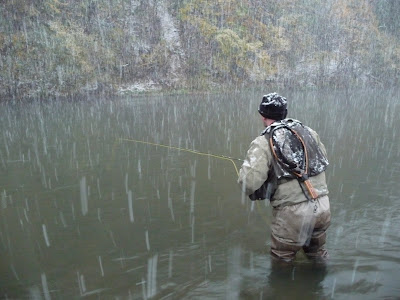 Hailing from Scotland, Jim Lees has to be one of the hardiest fishermen I've met. Withstanding sub-zero temperatures, Jim literally had to be dragged from the water at the end of each day. He even managed to fish without gloves, amazingly his fingers still functioned in biting winds. Granted, his sheer determination paid off time and again as Jim got amongst some nice grayling, even late in the day when BW-O spinners returned to egg lay. What took some coming to terms with was the fact that female spinners were still prepared to egg lay, who would have believed spinner falls in Arctic conditions.......