During a recent week on the river Wharfe at Bolton Abbey we experienced hatches of mottled winged flies.  As Large Brook Dun (Ecdyonurus torrentis) are common in these parts I initially put the activity down to these.  However the hatches resembled those of March Browns (Rhithrogena germanica) which often emerge in definite flurries or pulses.  Inquisitive as ever I managed to nab a few of duns.  Exhibiting a dark fleck in the upper femur and with a clear window in the wing with no apparent cross veins, amazingly these were March Browns.  Rumour has it there’s been no official record of March Browns in Yorkshire.  With that, doubt crept into mind, nothing for it then except for the experts to cast their beady eye over my findings.  Craig McAdam (Invertebrate Conservation Trust) and Stuart Croft kindly confirmed that these were indeed Rhithrogena germanica-excellent news then.  Paul~ 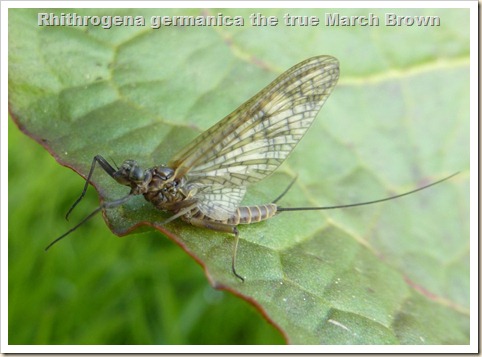 It’s easy to see why fishermen mistake Large Brook Duns (below) for the true March Brown (above).  Although images are no substitute for examining bugs first hand, you can clearly see a more olive-yellow tinge to the wings of the Large Brook Dun whereas March Browns tend to exhibit a monotone shade of brown. 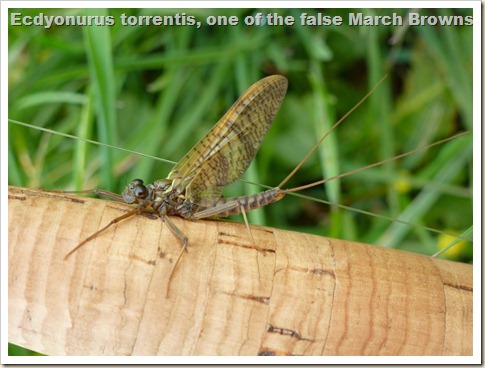