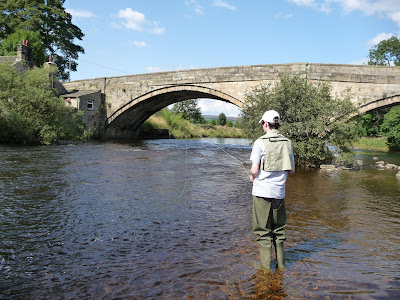 Nice to see a youngster:

A recent day on the Wharfe with William and Toby Kinread saw bright conditions and fresh water (much needed) from the night before, making for challenging conditions. There were a handful of fish showing, just about enough to warrant a drift with a dry fly. Thankfully, 14 year old Toby took to the river like the proverbial duck to water. His understanding of the river's mechanics allowed him to present both nymphs and latterly dry flies upstream with ease. It's often said that children soak up information like a sponge, if only more youngsters would pick up a fly rod. 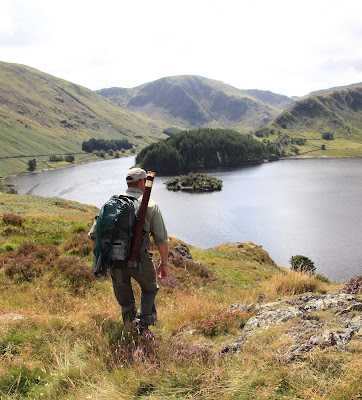 The first week of August saw us on one Haweswater-one of the Cumbria's prettiest lakes. A warm, muggy afternoon clearly encouraged Heather Fly onto the wing (a close cousin of the Hawthorn Fly). There was the odd flying ant joining in on the action too! With so much food being blown on, what trout could resist? And despite bright overhead conditions, fish could be found rising in the more sheltered bays. Usually, a team of dark coloured wets bring the desired response, however those residents in Haweswater had seen it all before, instead they favoured black hoppers fished static.