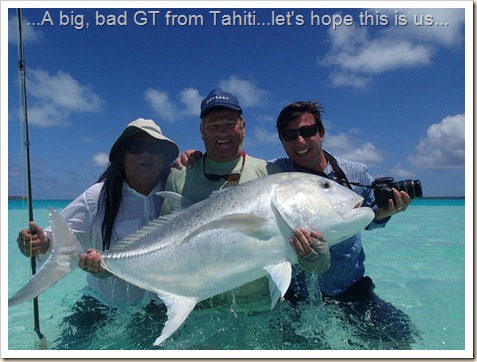 Traveling to London Heathrow was a little ropey yesterday though eventually made it and our flight even left on schedule. We’re currently laid up in LA and boarding soon to the remote Island of Tahiti.  Reports tells us that there is little in the way of communication out there, so it may be a while before you hear from us as were planning to camp on tiny islands for most of our stay… 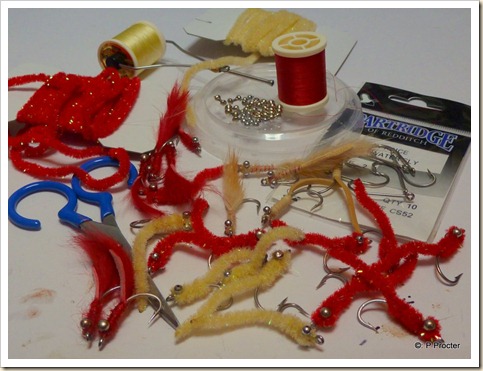 The word is that South Pacific bonefish predate heavily on sandworms.  Apparently these are pretty much an aquatic version of your good old, common earthworm found in our gardens… Though these do vary in appearance from the more obvious brown shades to vivid red and even a curious pale yellow/tan colour.  I’ve frantically been tying imitations up all week and as ever started to stray from the prescribed patterns to all kinds of articulated variants, which in turn has opened a proper can of worms! 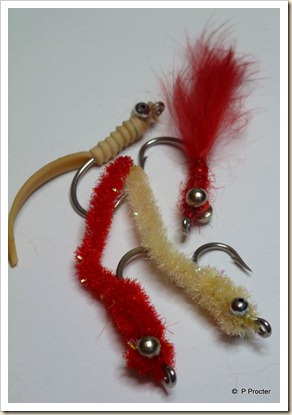 Four different sandworm patterns, but which one will the bonefish favour?

Mat McHugh of Fly Odyssey has teamed up with a group of French/Belgium marine biologist to help study the Giant Trevally and South Pacific bonefish inhabiting the shores of Tahiti. I’ve been asked along to assist with this project which I’m sure will involve a fair bit of fishing too. Currently, our dates are sketchy though I’ve been up to my neck in fur and feathers for weeks now tying up all sorts of fluffy concoction that will hopefully tempt these aggressive beasts. There’s light at the the of the tunnel now, giving me time to pack in readiness and finally catch up with blogs etc. Happy New Year and let’s hope 2013 is somewhat drier.

You need patterns like this outsized 3/0 Clouser to turn the heads of apex predators like Giant Trevally. Adjacent is a size 12 black dry fly that provides a sense of scale! 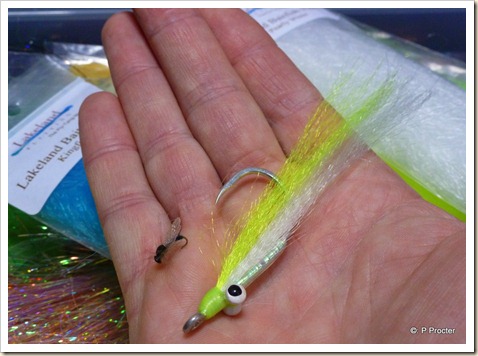