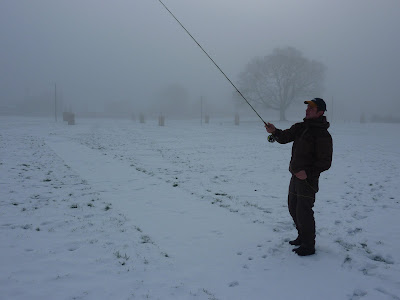 Recent heavy snow in Cumbria may have caused traffic problems, which ultimately curtailed our trips out fishing, but there's still a chance to get out and flex a rod. Tony Riley and myself decided to sharpen up on presentation casts-involving curves and mends. Whilst it's no substitute for actually getting your string pulled, there's a heap of fun to be had. 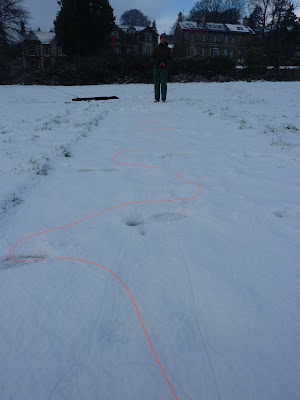 ~Of course, the ultimate is being able to scribe your initials into a cast....!~ 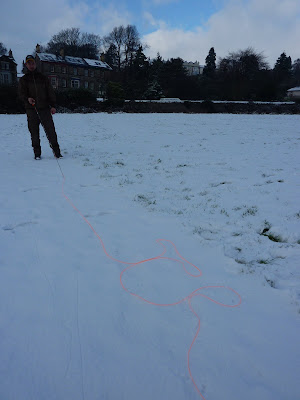 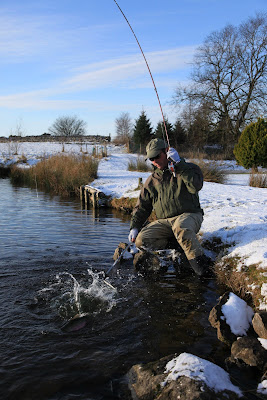 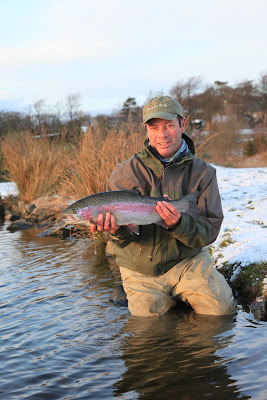 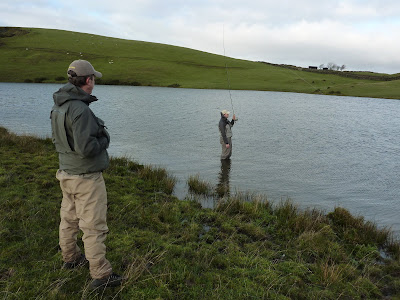 ~Tony Riley watches on as Jim Williams braves a strong breeze~
Have a Cast:

Due to recent heavy rain the local rivers remain somewhat out of condition (some might say positively angry!). Jim Williams had made the long pilgrimage north to try for grayling and rather than twiddle our thumbs, we set out to do a little casting. Aside from being good fun, what better way to sharpen your skills for the coming season than flexing carbon. Honing our accuracy and timing, Jim, Tony and myself had great entertainment on an otherwise chilly afternoon. Unfortunately the following day saw even more rain, so Jim didn't even get anywhere near the Eden-there's always next time Jim. 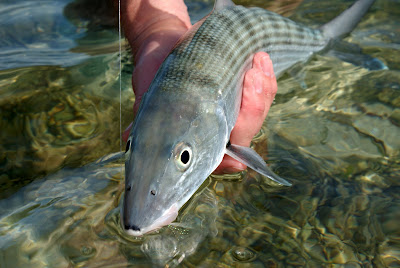 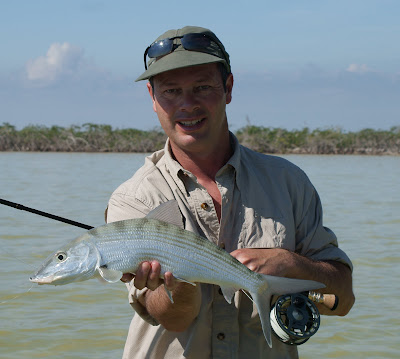 ~A typical Bonefish~
Bonefish Fever:
Ebbing tides bring a slight drop in water levels, opening up many areas for wade fishing. This involves strolling through ankle deep water, searching for bonefish. Their tails often give them away, as bonefish tilt head down to forage for shrimps and crabs in the sandy bays. Sleek, elegant fish that have blistering pace and I never tire of pursing them. Hilary Langan agrees 100% and joined me for a day on the flats. We had an absolute ball sighting nervous bonefish that often called for a delicate presentation to tempt them. Of course, any wayward casts sent fish scurrying to deeper water. Our company for the day came in the way of an occasional lemon shark, quartering the flats in search of a meal. It's always good to see such predators as they indicate other catch-able fish are nearby, which usually respond to a fly.

~Hilary Langan-the smile says it all~ 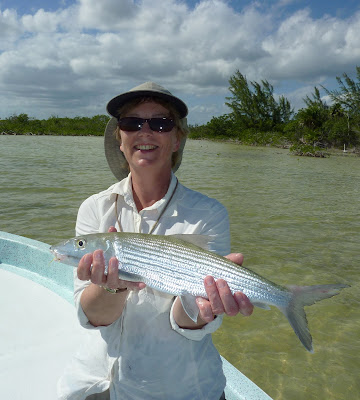 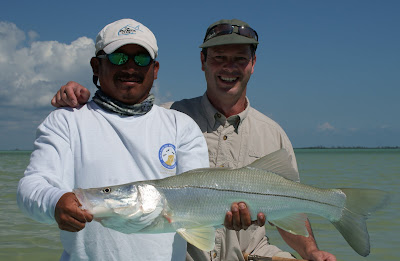 ~A nice snook from the mangroves~
North Wind brings on the Snook: 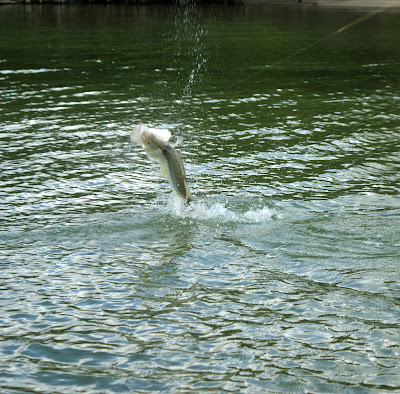 ~Off to fight another day~ 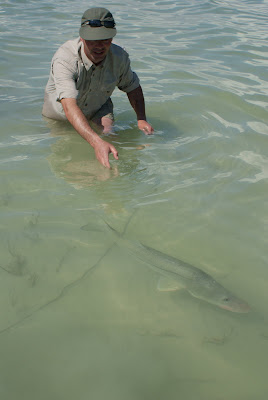 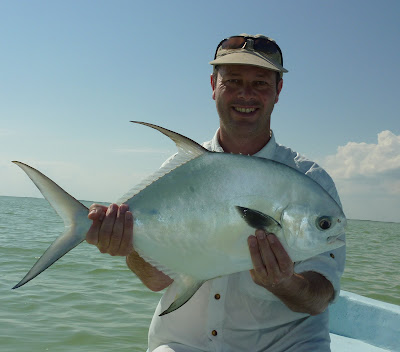 ~A permit under the belt on the first morning~
Permit on the Prowl:

Those new to tropical saltwater fly fishing will initially find striking fish an issue. To set the hook properly, you need to pull sharply on the fly line rather than lift the rod, as we commonly do when trout fishing. All sounds simple enough in theory, but in the heat of the moment, it's easy to forget and lift the rod instead. So having ease into my annual trip by stalking bonefish, with promising conditions, we went in search of permit. Highly prized, these fish have blistering pace and can be difficult to fool. Imagine our excitement then to find them feeding hard on the first day. The fish above took the fly a mere rod length from me. Moments later it was some 150 yards away and still heading for the horizon. Jonathon was possibly one of the most fortunate that day. Skillfully hooking a permit the fish charged off, only to come unstuck moments later. He managed to get another cast at the same fish and amazingly it took again (jammy sod....), no mistake second time as Jonathon piled on the pressure to land a cracking permit. 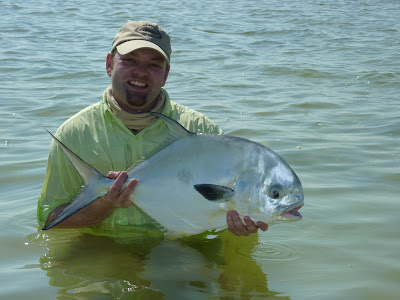 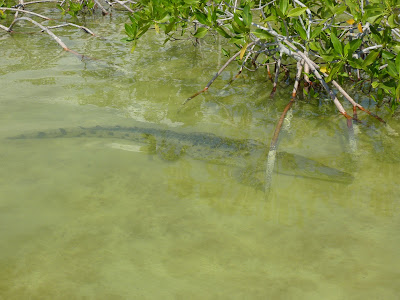 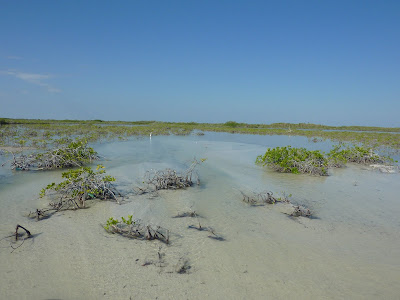 Our first morning in Ascension Bay brought clear blue skies and the faintest of breezes-ideal conditions for visual fishing on the flats. Quietly navigating the many channels allowed us to slip into secluded lagoons in search of tailing bonefish. Of course there are many more creatures which share the this environment too. Along with horseshoe crabs (a prehistoric looking arthropod), flamingos dotted the margins in their stunning pink livery. With ospreys wheeling overhead too, it was difficult to focus on the job in hand. 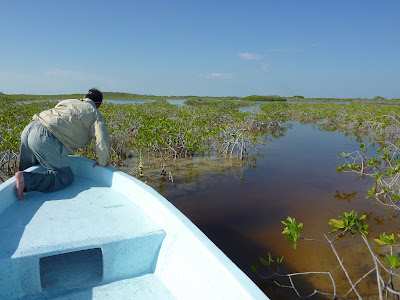 ~Flamingos feeding along the mangrove margins~ 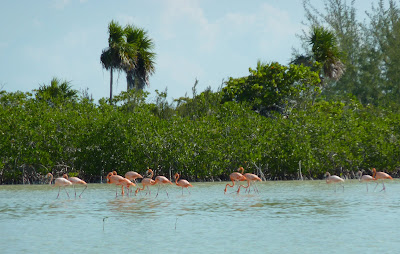